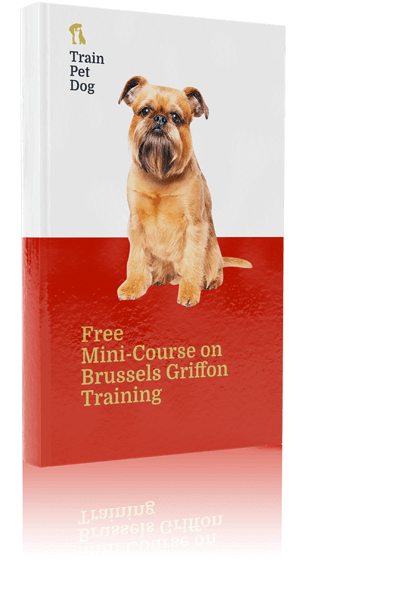 Subscribe to The FREE Brussels Griffon Training Course to learn how you can easily turn your unruly and disobedient Griffon into a loving, friendly companion. Step-by-step tips for puppy housebreaking, dog obedience training and stopping bad behavior.
Sign Up 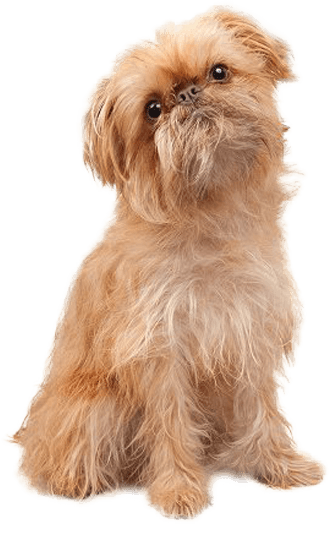 The Smooth-coated Petit Brabancon probably owes its existence to the introduction of pug blood. It is reasonably well documented that the Pug and the King Charles and the Ruby Spaniels were crossed with the original Belgian dog. From these crossings, two distinct types of coat emerge, the harsh-coated, bewhiskered rough, and the smooth-coated Brabancon.

Some of the colorings also are attributed to these crosses: rich red, black and tan, and solid black. The Brussels Griffon was imported to England and America during the 1880s.

Breed Selector Tool - is the Brussels Griffon the right breed for you?

Is the Brussels Griffon the right breed for you and your family?

Find out by using our Free Dog Breed Selector Tool

Is your Brussels Griffon dominating over you?

Do you make these mistakes with your Brussels Griffon?

Are you inadvertently snow-balling bad behavior in your Brussels Griffon? Evaluate your Dog Training Style from our Free Tool and learn how best to deal with your dog.

A General Appearance of the Dog

The Brussels Griffon is a sturdy, compact little dog of squarish proportions. His thickset body is agile and sporty and serves to offset his most pronounced feature, a large domed head. The expressive nature of this breed’s face is his most noted characteristic.

The breed is sometimes known as the “Monkey Faced” dog due to its unique, almost human pout. His eyes are prominent and set well apart with long lashes and dark edges. His nose is usually very black and short. It is set back towards the eyes and up-tipped. The ears are small and set high on the head and can be cropped which will give them a pointed look or left natural giving them a soft fold forward. The jaw is undershot, and along with a natural beard, gives him a human-like expression.

There are four basic coat colors:

1) Red: reddish brown with a little black at the whiskers and chin;
2) Belge: black and reddish brown mixed, usually with black mask and whiskers;
3) Black and Tan: black with uniform reddish brown markings, appearing under the chin, on the legs, above each eye, around the edges of the ears and around the vent;
4) Black: solid black.

The Brussels Griffon coat comes in two types, rough or smooth. The coat, whether rough or smooth, should be brushed and trimmed to maintain a neat appearance while the wired type should never appear unkempt or over-groomed.

Rough: The rough coat tends to be dense with a ‘wiry’ texture but neither woolly nor silky. It can be 1-2 inches in length on the body and slightly longer around the eyes, cheeks and chin, forming a fringe around the face.

Smooth: The smooth coat has short, straight hair that is glossy in appearance. 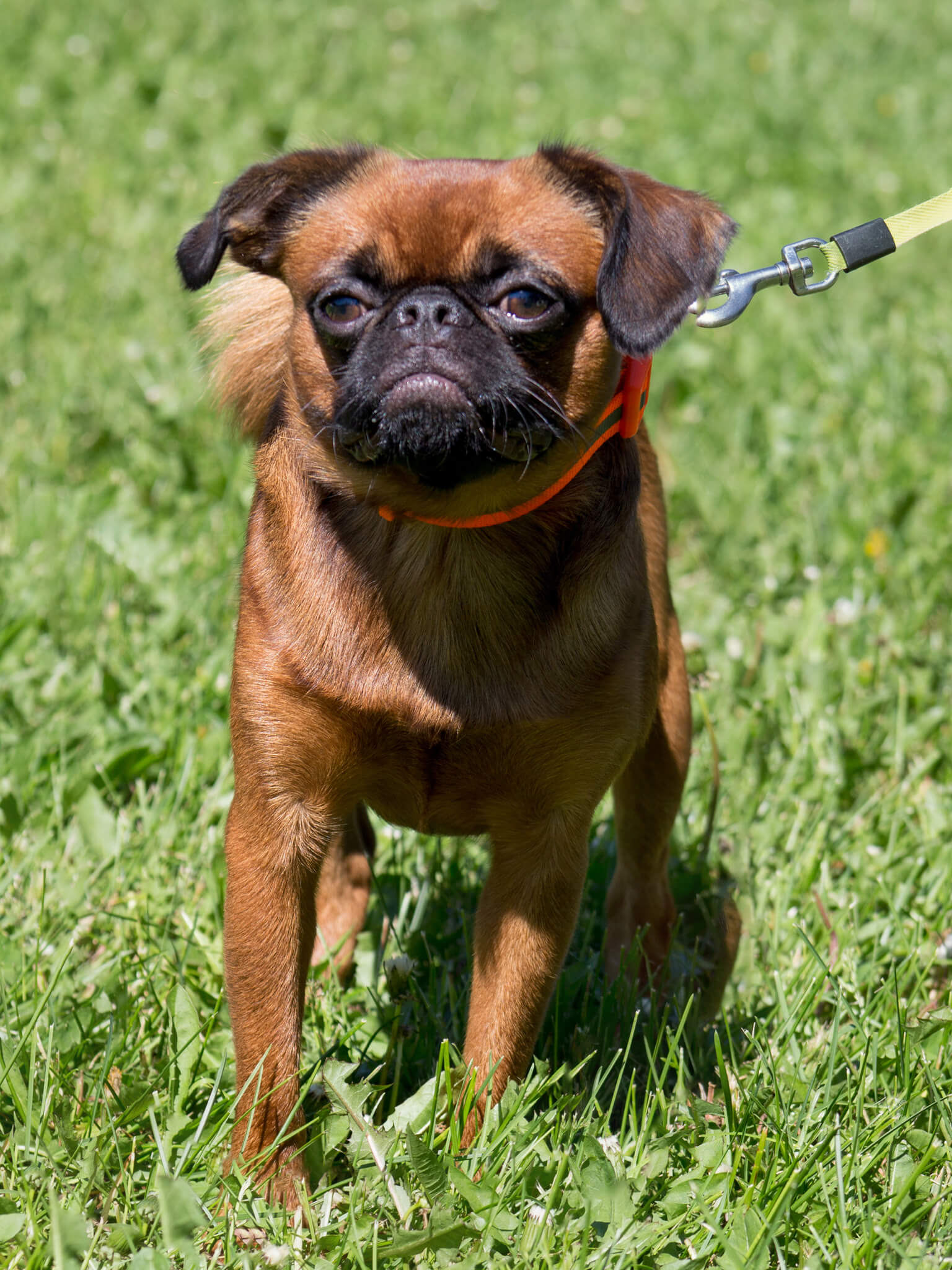 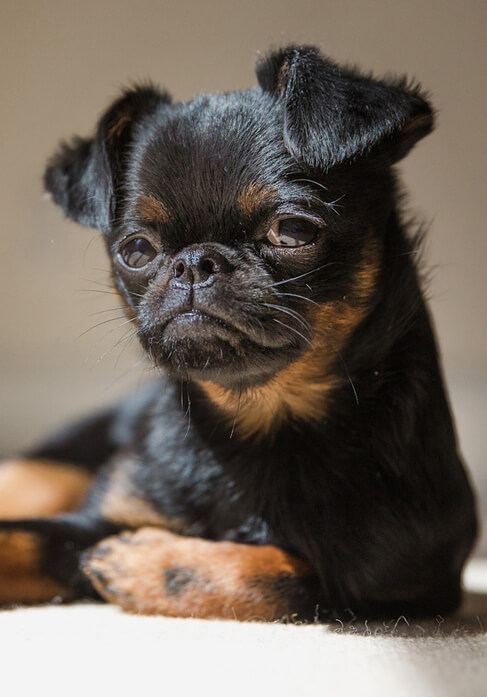 The Spanish Water Dog is an extremely intelligent, fearless, ever-active, strong, attentive, happy and well balanced versatile working dog with strong herding, hunting and guardian instincts. It is a devoted companion. It is reserved, not shy, with strangers. They can be protective and territorial.

Are they suited to families with kids?

Most of them are good with children and other animals if properly socialized.

The activity level of the Brussels Griffon is high, and these dogs need to have outdoor exercise on a regular basis. This breed enjoys walking and has highly developed climbing skills. Care should be taken to closely supervise any climbing activity; the Brussels Griffon may fall and sustain severe injuries if it falls from several feet off the ground.

How Much Exercise Does the Dog Need at every stage of its Life?

Puppies of the Brussels Griffon are very active and need lots of toy play to keep them both physically and mentally exercised. Early training will serve to enlighten and occupy your pet. Without proper outlets for energy, this breed can become mischievous and destructive. Giving your Brussels Griffon the right direction in the beginning will not only allow entertainment for you and your family but give him an enjoyable start.

Adult Brussels Griffon are still quite active but need less toy play and are happy with walks or time spent in the yard.

How to take care of a Griffon Puppy?

How to take care of the Puppy?

Puppies of this breed need to be consistently supervised as they can easily become lost or harmed within an indoor or outdoor environment. An early trip to the veterinarian for a general checkup is recommended, especially if the Brussels Griffon pup was purchased from a private party.

The Brussels Griffon needs to be brushed two to three times a week.

This breed’s rough coat requires hand stripping by a professional groomer and the financial considerations of this service should be taken into account when choosing this coat type. The dog’s facial hair should be combed frequently to remove debris and food remnants. Owners can use a grooming mitt to remove dead hair from the dog’s body.

The smooth coated types of the breed are easily maintained and usually can be done at home by their owners.

Bathing for either type of coat should only be when necessary. The Brussels Griffon’s nails need to be clipped once or twice a month.

This breed sheds little to no hair and is quite clean and odor free.

While the SWD seems to be a very healthy breed there are some issues that the SWD have, just like all other breeds. There are cases of Hip Dysplasia in the breed, so choose your breeder carefully.

All breeding dogs should have their hips tested, either by OFA or PennHIP. There have been a few cases of PRA reported in Europe so it is advised that all breeders should test their breeding stock for PRA and other such genetic eye diseases with a yearly CERF exam. A responsible breeder will be able to produce the results in writing.

Like other Water Dogs and related breeds, they grow hair in their ear canals and can be prone to ear infections. The ears must be kept dry and clean. . Because these dogs are (as a general rule) so active and energetic as puppies, they may seriously injure themselves from too much running and jumping when their skeletal structure is still developing.

The Brussels Griffon was recognized by the American Kennel Club and The Kennel Club in the United Kingdom in 1910.

Train Your Brussels Griffon To Listen To You

Get Instant Access to Your Training Now - For Free

Sign up for our Free Brussels Griffon Mini Course to have a housebroken, obedient dog that happily comes to you every time you call.

You'll learn new commands to obedience-train your dog as well as how to housebreak your dog in 6 days or less.

You'll also learn how to eliminate bad habits like barking, nipping or biting, jumping, or pulling on the leash.Here's just s small fraction of what else you'll learn in the course:

Whereas other dog training related web sites and books offer generic information for dogs in general, ours is the ONLY web site that offers Griffon information specifically, from a renowned panel of experts - because as you probably know, Griffons have their own special training requirements that other dogs don't have.

The Brussels Griffon training information you will read here was developed by a panel of renowned dog training experts whose combined wisdom represents nearly 100 years of specialist experience training dogs.

Here are a few of our experts:

training dogs ever since he was 14 years old.
NBA players, NFL players, professional golfers, singers, wrestlers, governors, CEOs, billionaire entrepreneurs, and many other celebrities trust Ty because of his unique approach to training their pets.

He has trained dogs in 18 states in the U.S.A and four other countries worldwide and has spent several years working with high level executive protection dogs who make wonderful family pets, but potent guardians if called upon.

Ty is a renowned Dog Trainer who has been featured in National TV and Voice of America.

Sally has a current practice which teaches nearly 200 young dog owners to train their dogs in obedience and agility each year.

Having spent over 40 years training dogs, Sally has proven experience in helping dogs to love and obey their owners and bond deeply with them - while guiding owners to truly appreciate the wonderful gift of friendship this inevitably brings.

Sally has 40 years of experience training dogs. She now teaches nearly 200 young dog owners, each year, to train their dogs.

Val is an internationally recognized Expert Animal Communicator and Master

Healer who has authored 6 books on Animal Communication and has been featured in several TV and Radio shows such as the Wayne & Jayne Radio Show and Whole Life Radio with Carmen & John LaMarca.

Her uncanny insight into 'animal thought' comes from having intimately worked with over 6,200 animals during the past 30 years, which is why we trust her profound experience when she speaks.

Dr. Lauten has a Masters in Animal Nutrition and a Ph.D in Biomedical Sciences.

Recently a guest of Dr. Marty Becker on "Top Vets Talk Pets" and interviewed by The Oregon Live, she has authored several peer-reviewed articles and veterinary nutrition reference book chapters.

With 5 years of experience teaching Veterinary Nutrition at a Veterinary Teaching Hospital, Dr. Lauten brings unequalled veterinary perspective into how your dog should be cared for both medically and nutritionally.

With a Masters in Animal Nutrition and a Ph.D. in Biomedical Sciences, Dr. Lauten is considered one of the foremost animal nutritionists in the U.S.

What Other Dog Owners Say…

Did you know we have over 875,000 subscribers of the FREE Brussels Griffon Training mini course?
You can also subscribe for free, but first...
Read what other dog owners just like you found when they subscribed to this mini course:

Here are a few of our experts:

"I was amazed at how quickly he (Button) picked up the commands... Your mini course taught me the most efficient, gentle, fun way to bond with my dog. My dog is my buddy now, ... I can't remember a time when I was any more proud."

"Without this mini course, Ginger's aggressiveness towards other dogs would have escalated. I would recommend everyone to get this course - you will be glad to get a well trained puppy at the end."

"The mini-course gives insights into the way a Brussels Griffon thinks and reacts to behavior training. I have been able to stop T Bone's chewing habits because of this course."

"I trained Hamish from your Mini course. He is now an obedient dog, he understands all my commands, I feel proud when people comment on how well behaved he is."